It is impossible to discuss NFT branding without mentioning CryptoKitties - the brand that broke Ethereum in 2017 and was many people's first entry into blockchain, cryptocurrency, and NFTs. Earlier posts assessed CryptoPunks, Bored Ape Yacht Club, and Azuki NFT brands in the context of Marketing Mix. What is the CryptoKitties marketing mix and how has this collection of cats made it so long? 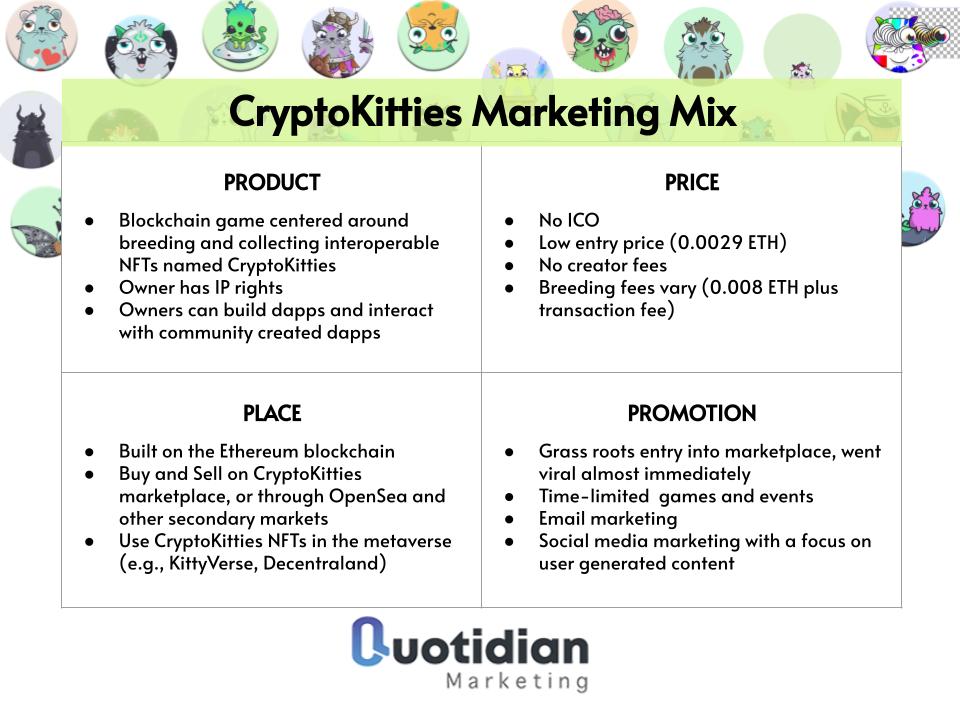 The CryptoKitties blockchain ecosystem was created for developers to explore the possibilities of web3. The primary CryptoKitties product is the collectable JPEG image of a cat whose characteristics are tracked on the blockchain. CryptoKitties are limited to a maximum of 50,000 with randomly generated "Gen 0" NFTs released on a regular schedule through 2018 and exclusive NFTs launched regularly. For example, the team is celebrating its fifth anniversary with an exclusive NFT and other community-building activities:

According to a recent blog post, 38,015 Gen-0 cats currently exist and the remaining 11,985 Gen-0 cats up to the 50,000 hard cap will stay unminted and locked in the CryptoKitties Ethereum contract for the foreseeable future. CryptoKitties NFTs can also be created by users through breeding, which is an entire game in itself and keeps the supply of CryptoKitties NFTs somewhat limitless.

CryptoKitties' primary brand promise is to help people explore the possibilities of blockchain dapps. Although there are many reports of high value sales, CryptoKitties NFTs are plentiful enough that there are free and low cost activities available to those interested in playing the game.

"There are Kitties available at every price point, and they all need love." CryptoKitties Guide

The brand has maintained this low barrier to entry position while also declining to launch an ICO during a time when many other blockchain projects were raising millions. As explained by the team in 2017, "CryptoKitties has the unique benefit of Axiom Zen’s backing. It would have been easy to leverage our parent company’s pedigree to hold an ICO *and *pursue our revenue model. However, it would have been disingenuous for both Axiom Zen and CryptoKitties to do so."

Place is a core element of the CryptoKitties marketing mix and brand promise.

"We want to make enjoying your Kitties in other decentralized experiences as easy as playing with them in CryptoKitties. The more you can do with your Kitties, the more fun you’ll have together and the more precious they’ll grow." CryptoKitties Blog Post

Unlike NFTs such as Bored Ape Yacht Club and Azuki that leverage in-person events, CryptoKitties is distinctly web3. "Our community of developers has invented tons of new things to do with your cats, including dressing them, racing them, and even battling them against each other." CryptoKitties Blog

The CryptoKitties Team announced its work on bridging the brand to a new blockchain named Flow in order to widen audience reach and enhance the product to improve metaverse interoperability. "Kitties born on Flow will have a new, upgraded look, ready for everything the new world will throw at them. The art style is much more flexible, letting us – or the community – easily extend Kitties into virtual worlds and the broader metaverse that will exist on top of Flow."

CryptoKitties had the unique advantage of capturing global attention by going viral. The brand capitalized on early exposure and embraced traditional marketing methods such as email marketing, social media marketing, and content marketing. The CryptoKitties brand has been cross-promoted on all major web3 platforms, establishing the ubiquitous nature that has made CryptoKitties somewhat of a mascot for NFTs and blockchain.

In summary, the CryptoKitties target audience is composed of people interested in blockchain gaming. The products are digital collectibles with proof of ownership, priced for low barrier to entry, minted on the Ethereum blockchain and moving to Flow, available on the CryptoKitties marketplace, secondarily available on OpenSea, and promoted via email marketing, social media marketing, and co-branding.