The Marketing Mix - referred to as the "4 Ps" (Product, Price, Place, Promotion) is a classic business concept used to evaluate brand competitiveness and overall fit relative to a target audience. The 4 Ps are also helpful for anticipating how changes in market dynamics may trigger specific responses by competitive brands. This post uses the 4 Ps framework to identify CryptoPunks' market positioning. Future posts will explore other top NFT brands, then will compare and contrast the 4 Ps of various NFT brands.

Due to the small size of the nascent NFT market and its global reach, target audience development has had to evolve with the industry. CryptoPunks were among the first NFT brands to present themselves to the marketplace, tapping into a first-mover advantage opportunity that no longer exists. Although there are many CryptoPunks derivatives, none have come close to achieving the massive sales volume of the first-mover.

Let's review the CryptoPunks NFT brand in the context of 4 Ps to determine how it differs from others and where its strengths (and weaknesses) may lie. 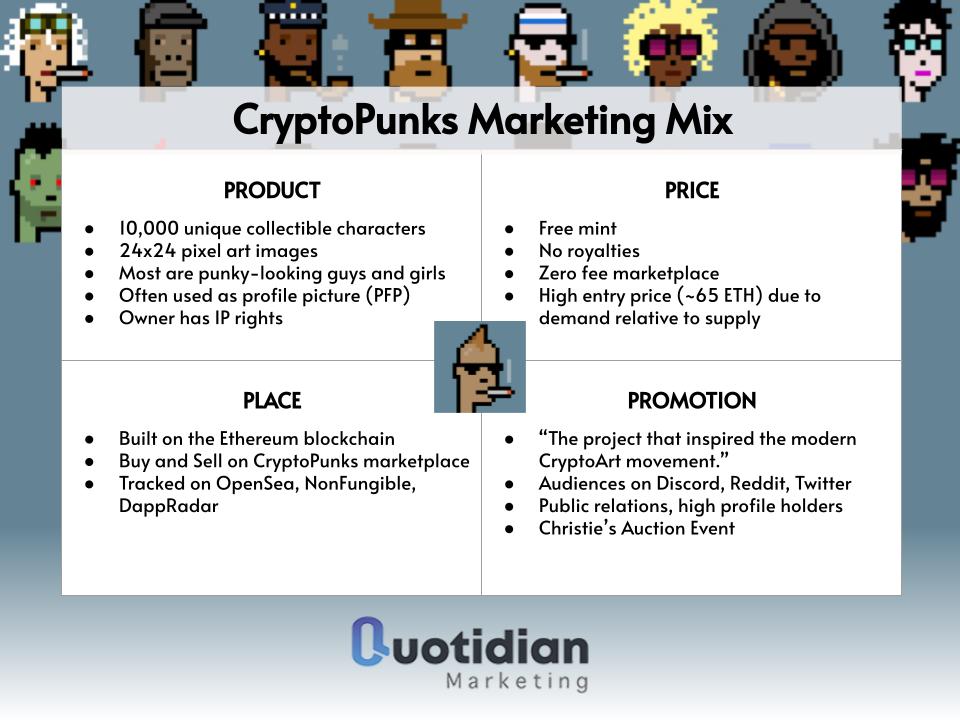 The obvious "Product" sold by NFT brands is a media file stored on a blockchain. However, product differentiation for NFT brands is expressed through features such as intellectual property rights for owners or the promise of future NFT drops to owners of certain NFT collections. CryptoPunks have established a Product Position focused on "proof of ownership" as feature. This quote from CryptoPunks says it all:

The Cryptopunks are one of the earliest examples of a "Non-Fungible Token" on Ethereum, and were inspiration for the ERC-721 standard that powers most digital art and collectibles.

CryptoPunk NFTs are priced to convey status, with many selling for hundreds of thousands to millions of dollars. However, despite incredible value demanded currently (e.g., Punk 5822 sold for $23.7 million), CryptoPunks were given away for free when they were first released. As CryptoPunk NFTs gained notoriety, their resale values increased to reflect public perception of the luxury status demonstrated via CryptoPunk ownership. The CryptoPunk marketplace does not charge transaction fees, which is aligned with the brand's no-fuss, community friendly persona.

One of CryptoPunks' core differentiators is its marketplace, which is currently ranked third in all time trading volume at $2 billion, after OpenSea ($10 billion) and Axie Infinity ($4 billion). Unlike many NFT collections that leverage OpenSea or other marketplaces to access large audiences, CryptoPunk NFTs must be purchased using the brand's marketplace. Due to their prolific status in the NFT market, CryptoPunk stats are tracked prominently on other websites including OpenSea, NonFungible, and DappRadar.

As an early entry into the NFT market, CryptoPunks had to communicate their value proposition as well as educate consumers on the new concept of digital artwork tracked on a blockchain. Despite the non-traditional product, CryptoPunks embraced public relations, leaning into news coverage and promoting high profile purchasers such as Mark Cuban, Jay-Z, and Serena Williams. CryptoPunks focused on the high-end digital art audience, with newsworthy auctions that enhanced public interest in the NFT collection as a potential investment. The brand continues to formalize its public relations strategy, including a representation deal with Hollywood agency UTA.

In summary, the CryptoPunks target audience is composed of status seekers with high spending limits. The products are digital collectibles with proof of ownership, priced to convey status, minted on the Ethereum blockchain, available only on the CryptoPunks marketplace, and promoted via traditional public relations methods as "the project that inspired the modern CryptoArt movement".

Want to dive into the CryptoPunks brand? Check out our blog post Interesting Facts About CryptoPunks for a thorough review and tons of links.