It’s less about “what” and more about “who” keeps projects from achieving mass adoption. Alan Cooper’s “The Inmates are Running the Asylum” is a pivotal sampling of marketing wisdom that holds the answer. The book, published in 2004, describes a concept that is now core to user experience and content marketing: the user persona.

“A user persona is a semi-fictional character based on the people who currently use your website or product. Using demographic and psychographic data, a persona reflects who users are, what they need, and what may stop them from getting it.” – HotJar

Essentially, user personas are meant to help businesses put themselves in the shoes of their target audiences to enhance decision-making in terms of product development.

There are numerous connections between Dotcom era startups and modern day cryptocurrency projects. Notably, the innate interaction between human and computer, and the emergence of disruptive technology. Looking back on the Dotcom era, winning brands such as Amazon, Google, and Facebook provide a mass adoption playbook for savvy cryptocurrency entrepreneurs willing to draw connections.

Let’s explore lessons from the rise of the world wide web and the eventual mass adoption of ecommerce. Alan Cooper will be our guide – vicariously through his book “The Inmates are Running the Asylum” and his reasoning behind the user persona philosophy.

Mass adoption of disruptive technologies comes from product usage, not necessarily from technological advances. Accordingly, Alan Cooper explained that there are two distinct groups to consider: programmers and users. In the scope of cryptocurrency, we may describe these groups as developers and users.

In regard to mass adoption, Alan Cooper explained that the psychographic differences of these two groups creates an invisible wall between them, dampening the feedback cycle and slowing the pace of adoption. One result of this invisible wall is “cognitive friction,” – a disconnect between the user expectation and the actual user experience.

“Cognitive friction – like friction in the real world – is not necessarily a bad thing in small quantities, but as it builds up, its negative effect grows exponentially.” Alan Cooper

According to Cooper, “high cognitive friction polarizes people into two groups. It either makes them feel frustrated and stupid for failing, or giddy with power at overcoming extreme difficulty.” He defined these two groups as “apologists” and “survivors,” which could be considered “OGs” and “newbs” in the cryptocurrency world.

This flow chart shows the methodology I’ve used to categorize cryptocurrency users. More research will likely refine the questions and possibly the number of user personas. 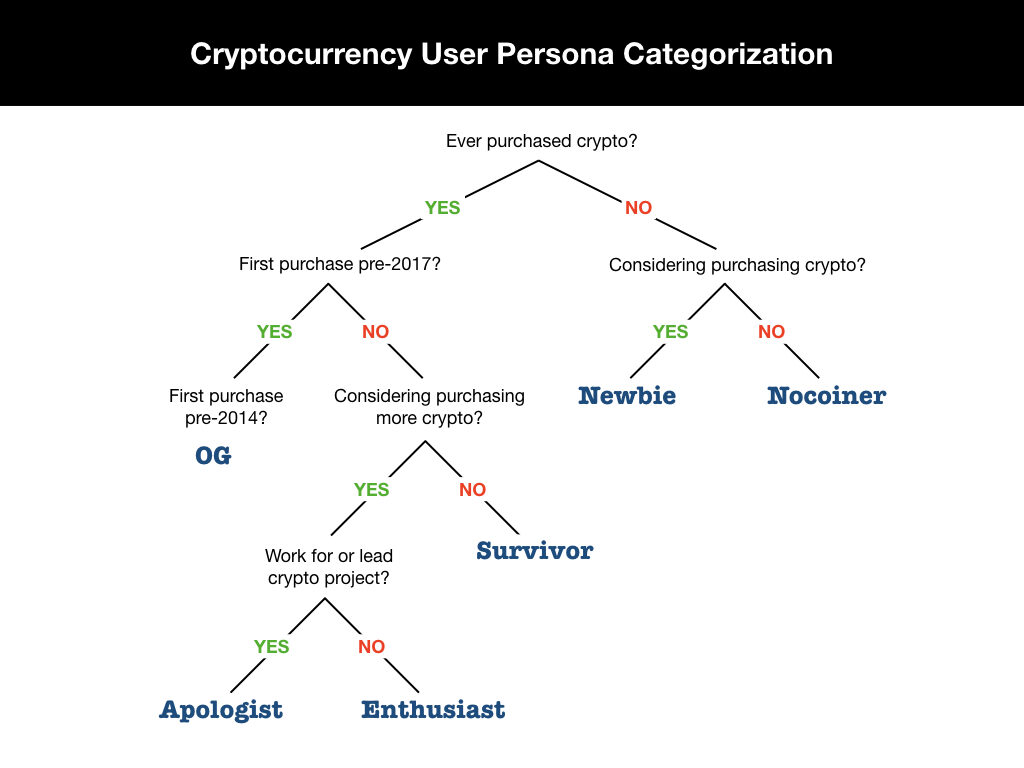 Like the honey badger, cryptocurrency apologists (and OGs) just don’t care. In fact, cryptocurrency users often deride those who are not savvy in crypto. They’ve even developed the term nocoiner, a somewhat demeaning nickname for those without crypto holdings.

Once a nocoiner makes their initial movements into cryptocurrency, they inevitably get burned in some way. Be it scam or user error on a transaction, novice users are told that their suffering is a rite of passage. They can either deal with the responsibility of “being their own bank” or get out. Unfortunately for the cryptocurrency industry, this dog-eat-dog mentality makes mass adoption more difficult to achieve.

The internet is awash in negative cryptocurrency stories – some real, some fake… all scary to cryptocurrency newbies and nocoiners. Scams and tax questions aside, stories of user error resulting in massive financial losses is extremely disheartening to new users. This alone might be enough to keep the masses away from cryptocurrency, but to make matters worse, advanced cryptocurrency users can encounter devastating losses.

One advanced cryptocurrency user recently shared his experience with a SIM port attack that ended in a $100,000 loss. This type of attack would blow the minds of most nocoiners. They may not even realize that the SIM card is a vulnerable element of their beloved smartphone. So, when an advanced user feels the need to add this disclaimer to his post outlining the attack, something is amiss with the user experience:

“Given my naive security practices, I probably deserved to get hacked — I get it.” Sean Coonce

However, Sean then explains the core of cryptocurrency user plight: “… [my] thoughts are juxtaposed with two overriding feelings — laziness and survival bias. I never took my online security that serious because I had never experienced an attack. And while I understood my risk profile, I was simply too lazy to secure my assets with the rigor they deserved.” Should we hold Sean accountable for the loss? Or is it time to consider that the cryptocurrency user experience is currently nightmarish and unwelcoming to the uninformed?

Are cryptocurrency Apologists and OGs the keys to removing barriers to mass adoption? Could a shift in their opinion of newcomers make a difference?

“Why would a vendor write off the lion’s share of the market? Because it removes the blame of failure from the executives and software engineers and places it squarely onto the shoulders of innocent users.” Alan Cooper

With regard to cryptocurrencies, OGs, Apologists, Enthusiasts, Survivors, Newbies, and Nocoiners have different goals and opinions on how to achieve those goals. Alan Cooper classified personalities into two categories: Homo Logicus and Homo Sapiens.

With this in mind, the six cryptocurrency personas could be classified as such:

Basically, crypto OGs, apologists, and enthusiasts are a completely different species than the average human!

Recognizing that the psychographic disconnect between homo logicus and homo sapiens exists, how can cryptocurrency marketers bridge the gap and forge a path to mass adoption? Must the marketer focus on crypto enthusiasts? Or are “nocoiners” the path to market leadership?

It is crucial to understand that many user types exist, and none of them is more pivotal in generating mass demand than the entry-level user. However, technophiles, cypherpunks, and Bitcoin maximalists are important components of the cryptocurrency ecosystem.

The challenge for cryptocurrency marketers and entrepreneurs is to separate their personal bias and develop gateways to novice user success.

The effectiveness of push marketing – using interruptive advertising tactics to “push” an offering in front of a consumer – has decreased in proportion to mass adoption of the Google search engine. Early internet advertisers enjoyed a few years of abusive banner ads and deceitful tactics, but consumers eventually found an ally in Google, which provided a clean interface and positive user experience. Google’s mass adoption brought with it the rise of pull marketing and ultimately, content marketing.

“It is harder to unilaterally push your organization’s agenda when buyers control how they find information, compare features and benefits, analyze value, and then decide if, when, what, and where to purchase. In response, savvy marketers everywhere are working harder than ever to create relevant messaging and compelling content that’s easy to find online.” Kent Huffman

In the realm of pull marketing, the user is King and Queen. Smart brands know that success lies in giving the King and Queen what they want. Sometimes, the wants of the King and Queen (the masses) are in direct conflict with the opinion of the developer and power user. What is homo logicus to do? Serve the user or serve the technology?

Farming as a Gateway to Social Media Adoption

FarmVille, a social video game with an unoriginal premise, was launched in 2009 and ushered in a new era of social media use by previously uninterested groups, the majority of whom were older people. What can cryptocurrencies and related brands learn from FarmVille? Simple: Give the people what they want and make it easy for them to send referrals.

FarmVille was an immediate hit, attracting a mass audience within weeks. FarmVille creator Zynga was the obvious winner with some sources estimating over $1 billion in revenue each day at one point.

“In its first six weeks in 2009, FarmVille grew to more than 10 million players and became the most popular game on Facebook. By the next year, its player base passed the 80 million mark, according to information collected by AppData. By 2012, the game remained the site’s seventh most popular game.” Larry Frum

The game reached 31 million daily active users in 2011, 15 percent of whom logged into Facebook expressly to play the game. Within its first six months, FarmVille grew Facebook’s user base by 72.9 million monthly active users – over 20 percent of Facebook’s 350 million users. In dollars, the game was estimated to represent – at its height – approximately 10 percent of Facebook’s revenue. All thanks to an addictively simple game, social network referral system, and data-driven marketing tactics.

To put these numbers in perspective, the top blockchain DApp by daily active users is Endless Dice with over 38,000 users at the time of writing. Beyond DApps, the cryptocurrency mining app HoneyMiner reached 50,000 users in its first year.

Why was FarmVille such a hit with an audience that had previously avoided social channels? The brilliance was not just in Zynga’s marketing tactics, which included leveraging its existing user base to cross-advertise, running Facebook advertisements, and generating game-based referrals.

The secret was that Zynga put the user first, adhering to data-driven product development:

“The business would be metric-driven, combining intuition and data. The would enable the business to rapidly iterate and drive reach, retention and revenue. That is exactly how Zynga put distance between itself and others; it learned what users wanted and modified its games quickly, sometimes overnight, to better provide what the users wanted. Zynga started testing every idea.” Dean Takahashi

Who was Zynga’s target user? The hardcore gamer or the video game novice?

Mass adoption is not about niche targets, it’s about reaching beyond the enthusiasts and architects of the industry. Mass adoption is not about the technophile or the computer engineer. It’s about accessibility and comfort. However, advanced users need not despair – many novice users will become intermediate and advanced users, gaining skills needed to participate in more advanced games, and the cycle of growth from new user to experienced user will play out repeatedly until the market is saturated or the product is no longer desirable.

Technology learning curves can be a steep for the masses, but small successes help new users build confidence in core skills. Once new users gain confidence, they are more willing to attempt intermediate and advanced actions. Hence, the value of The Gateway.

Instead of trying to push people into adopting social media, Facebook and FarmVille provided a fun game that happened to involve the creation of a profile on a social channel, and that was referred by friends and family members. I urge cryptocurrency marketers to recognize that wallets and trading apps are similar to the social media apps that the masses previously found undesirable. Now, ten years after FarmVille’s release, everyone and their grandmother is on social media.

Mass adoption through welcoming and forgiving gateways such as CryptoKitties, Honeyminer, Lolli, and Niffler, will lead to more advanced user behavior.

“Cool technology and a red-hot market can’t overcome the deadweight of ill-conceived code. It’s not enough to bridge the gap between technology and need. Somebody needs to make humans want to cross that bridge.” Alan Cooper

Next on the research and writing agenda is an exploration into the six cryptocurrency user personas I defined in this article: OG, Apologist, Enthusiast, Survivor, Newbie, and Nocoiner. How do these users think and how can cryptocurrencies help them achieve their goals? Which gateways are most attractive to each user persona?

This cryptocurrency user persona methodology is in the earliest stages, so please reach out with your feedback and any thoughts you think will advance our understanding of the cryptocurrency user experience. Let’s discuss on Twitter: @Kristen_Colwell