Investors are wary. From inflation to geopolitics and across all markets, confidence is low. In an economy that already seemed dire for the middle class in America, we recently received yet another punch in the gut - the insolvency of FTX with an $8bil shortfall. EIGHT BILLION!

How Did This Happen? A lesson in Risk Management…

In his own words Sam failed to properly assess risk: 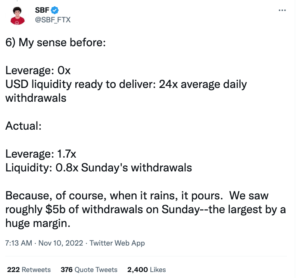 But, we know that actions speak louder than words. In truth, total transparency of client funds would have resolved the issue. As said by CZ of Binance, who tried to bail out FTX but then canceled the acquisition once he discovered just how negligent FTX had been: 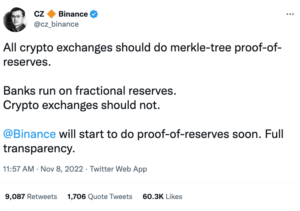 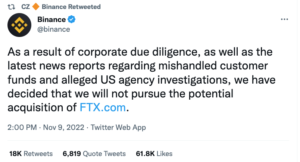 Improved risk management and full transparency are absolutely key to the future of crypto. But let’s not also forget the importance of governance - accountability was sorely lacking in the relationship between FTX & Alameda… Alameda and FTX pumped Solana tokens with low liquidity, now putting extreme pressure on the Solana ecosystem as assets are sold and the level of whale dominance is revealed in that popular layer-1 protocol. As a result, Polygon recently flipped Solana on Coinmarketcap.

I started digging into essential DeFi projects on Polygon and found 0vix well positioned with several key differentiators. I’m drawn to 0vix especially because of the in-house risk management team. From the docs, I see several ways in which 0vix is minimizing, monitoring, and controlling the probability or impact of unfortunate events (i.e. - managing RISK):

Aside from the product innovations, though, I also see the 0vix advisor team as worth mentioning. Specifically, 0vix has deep roots into the Polygon team with both Mudit Gupta, CISO @0xPolygon, and Hamzah Khan, Head of DeFi and Vibes @0xPolygonDeFi, as active advisors. Further, both Sandeep and Polygon frequently retweet 0vix posts. Since 0vix sees itself as THE money-lending protocol of Polygon, this relationship is important to highlight as an opportunity.

Let’s now look into the 0vix product innovations mentioned above…

Rather than the DeFi industry standard “jump rate” model, which has proven to be inefficient in unpredictable markets, 0vix makes use of a Dynamic Interest Rate. Dynamic Interest Rates change with markets, resulting in stable borrowing rates by incentivizing users to maintain liquidity during any market condition, especially during highly volatile markets.

According to 0vix: “Our model solves some of the biggest issues in DeFi, such as unsustainable and high-volatility yields during Black Swan events. Thanks to the dynamic interest rate, 0VIX can overcome the unhealthy borrowing incentives without sacrificing any of the protocol safety. We’ve stress-tested 0VIX using price-action data from the past three years, including some of the worst days in crypto history. We carefully monitored the protocol’s behavior in extreme conditions with over 1000 portfolios subjected to random price trajectories. Test findings show that 0VIX is more than capable of handling extreme market conditions. A key factor was the liquidation incentive mechanism that rewards liquidators for performing a foreclosure event. This mechanism kept the system stable during all kinds of onslaught.”

Further, instead of simply averaging Annual Percentage Returns (APRs), 0VIX offers different APRs for borrowing and lending. Markets with lower TVLs are allocated higher APRs compared to others. This acts as an incentive for users to interact with markets with lower TVLs, ideal for the overall health of the protocol and promoting sustainability.

When I spoke to Daniele Pinna, Head of Quantitative Research & Investment at 0vix he said: “Over the past months alone, we have built an in-house simulator for stress testing our protocol. It was a massive endeavor, which many competitors are too quick to simply outsource to closed-sourced, third-party codebases. With it, we have rigorously studied optimizations of our protocol parameters in a data-driven way.”

Permissionless: “Not your keys, not your coins!”

Remember Crypto Rule #0: “Not your keys, not your coins!” 0vix is the first DeFi protocol on Polygon to incorporate veTokenomics. By utilizing the protocol, lenders can supply static assets, transforming them into interest-bearing tokens in a permissionless fashion, while still having access to their assets at any time.

Daniele Pinna had this to say: “We strive to guide users' financial independence without compromising on 'Rule #0'. Recent events have shown more than ever the importance of judicious personal key management when interfacing with any financial products in the crypto ecosystem. In keeping with the spirit of 'Rule #0', we strongly believe that a responsible financial future must proceed via on-chain products which attempt to minimize, as much as possible, all trust required among willing participants. 0VIX is proud to work incessantly in these regards, designing, building, and testing DeFi infrastructure worthy of shaping society.”

Transparency is key to risk management. From its 24hr Liquidation Probability Dashboard to “Toxicity Numbers”, 0vix is bringing tailored risk management to user fingertips via product innovation focused on transparency.

0VIX recently introduced a new feature called the 24h Liquidation Probability Dashboard. This dashboard helps users track their investment positions by making liquidation probability data publicly available on the platform itself. The 24h Liquidation Probability Dashboard shows users information such as the probability of the user getting liquidated in the next 24 hours and which percentile of user risk their probability score falls into (to compare probability scores against other users in the system). With this data, users are able to conveniently track their portfolio performance and react accordingly, making it much easier to manage their own risk.

Toxicity numbers are an industry-wide metric used to measure exotic assets. It helps to calculate how much of an asset is actively used as collateral on lending markets, and compare that to the amount of liquidity available to safely liquidate the collateral. The 0vix research team told me that they intend to Oracle the 0vix Toxicity Numbers, adding to transparency and making this metric useful across the entire DeFi landscape.

What Comes Next for 0vix?

“In the coming months, with the help of key partnerships, we will unlock a spectrum of new features which we believe will become a new baseline for how to assess asset risks blockchain-wide. At the end of the day, when operating in DeFi, all user finances interplay with each other whether directly or indirectly. Focusing on one's own protocol simply does not capture the spectrum of risks that lurk in the shadows. We will be releasing advanced risk dashboards that will quantify the interdependent risk across major financial protocols across Polygon's DeFi ecosystem.” - Daniele Pinna, Head of Quantitative Research & Investment at 0vix

Combining Dynamic Interest Rates for sustainability, veTokenomics for a permissionless user-experience and a data-driven quantitative market risk assessment framework for increased transparency, 0VIX asserts that it “reinvents DeFi on Polygon” by “pioneering a new standard of measuring risks in DeFi.” I certainly hope transparency and risk management do become standards in the world of DeFi.

I’m into 0vix, believe in the mission, and will be pre-mining $VIX tokens. For the pre-mining, FYI, “all users supplying to or borrowing from markets listed on the 0VIX platform are eligible to receive rewards in the form of pre-mined $VIX tokens. Rewards are calculated and updated every week based on users’ activities in the previous week. The more a user lends or borrows, the greater the rewards earned.”

More DYOR in these threads! -